Job recruiters, be ready for a wave of requests to hire blockchain talent in 2018.

The number of job postings on LinkedIn related to blockchain, cryptocurrency, and bitcoin increased at least fourfold in 2017, according to data provided to Bloomberg Law. And sources say the number of such jobs is expected to grow this year too. 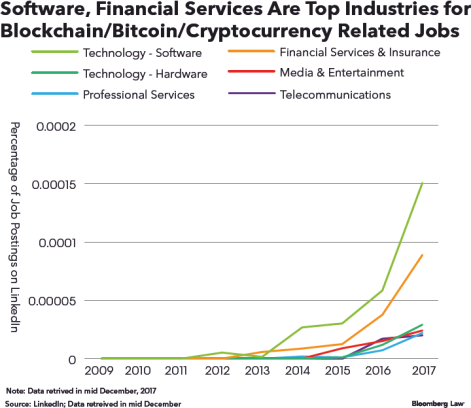 Workers with blockchain experience are in short supply because the technology is so new, but MOOC (massive open online course) and certification programs are starting to make up for the dearth of degree programs, sources say. To hire the best blockchain developers, recruiters might have to take new routes and be flexible about job requirements.

“A lot of companies have realized that they need to either adopt, adapt and find a place for themselves in a world that is going to run on the blockchain” or be left on the sidelines, Akshi Federici told Bloomberg Law. Federici leads ConsenSys Academy, the education arm of ConsenSys, a venture production studio building blockchain products.

The job volume shows great promise for growth in 2018, said Katheryn Griffith Hill, lead recruiter of Blockchain Developers, a staffing agency focused on blockchain talent. “People are desperate to get into this field, because it’s the direction the technology is going,” Hill told Bloomberg Law.

A lot of the growing demand for blockchain talent comes from startups, Hill said. By press time, there were at least 1,520 blockchain startups, according to AngelList.

Big companies are also hiring blockchain talent, often for in-house setups that function somewhat as startups, Hill said. In 2017, IBM had more than 400 blockchain projects going, employed more than 1,600 employees on them, and had more than 150 blockchain-related job openings in October of that year, according to the company.

Starbucks places a downpayment on a Blockchain vision | Diginomica

Is It Only About Taxes? Bitcoin Spreads Explained: Expert Blog | CoinTelegraph

Scoop: Forbes is trying out the blockchain | Axios

A Letter to Jamie Dimon – Chain