What is money? We all assume we know, because money is a commonplace feature of everyday life. Money is what we earn and exchange for goods and services. Everyone thinks the money they’re familiar with is the only possible system of money—until they run across an entirely different system of money.
Then they realize money is a social construct, a confluence of social consensus and political force– what we agree to use as money, and what our government mandates we use as money under threat of punishment.
We assume that our monetary system is much like a Law of Nature: since it’s ubiquitous, it must be the only possible system.
But there are no financial Laws of Nature for money. In the past, notched sticks served as money. In other non-Western cultures, giant stone disks (rai, a traditional form of money on the island of Yap) and even salt served as money.
In our experience, 1) money is issued by a government or central bank (i.e. a currency), and each of these currencies is the sole form of legal money (legal tender) in the nation-state that issues the currency; 2) each of these currencies is available in physical coins and paper bills and digitally as entries in bank and credit card accounts; 3) our currency is borrowed into existence by the central bank or by fractional reserve lending in private banks, and 4) this currency meets all of the utility traditionally required of money:
1. It is divisible into smaller units, i.e. a dollar is divided into quarters, dimes, nickels and pennies, or it is a small unit (for example, the Japanese yen, which is roughly equivalent to a U.S. penny).
2. It is secure, i.e. everyone can’t just print or make their own in unlimited quantities.
3. It is fungible, meaning all the units are interchangeable.
4. It is easily transportable.
5. It has a market value that’s easily discoverable, so buyers and sellers can confidently exchange it for goods and services.
But history informs us that money doesn’t have to be issued by governments,nor does it have to be borrowed into existence by banks, nor does every form of money have to satisfy all five requirements; it’s possible to have multiple forms of money which each serve different purposes.
In other words, our system of money is merely one of many possible systems of money. With the advent of digital cryptocurrencies, the range of monetary systems has expanded greatly.
We tend to look at money as value-neutral and apolitical, but as a social construct, it reflects specific social and political values. As I’ve explained in previous posts, our money is created and distributed at the very top of the wealth-power pyramid.
This feature of our money optimizes the accumulation of wealth and power in the top of the pyramid, and thus our social contract of money guarantees the concentration of wealth and thus rising wealth-power inequality.
To understand why, we need to start with money’s three basic functions. 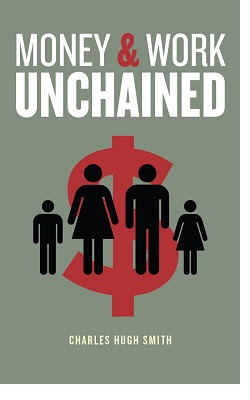 As a general rule, money is:
1. A store of value (i.e. it serves as a reliable repository of wealth);
2. As means of exchange between buyers and sellers;
3. A tool for recording transactions of credit/debt (i.e. it facilitates recording transactions and keeping track of credits, debts, assets and payments).
Modern-day government-issued currencies perform all three roles. The U.S. dollar, for example, acts as a store of purchasing power, a global means of exchange, and as a tool to keep track of transactions, debts and financial assets.
But in other social constructs, different kinds of money perform different functions.The giant stone disks on Yap (rai) are a store of value, and a means of exchange for high-value items.

How BitConnect pulled the biggest exit scheme in cryptocurrency | TheNextWeb

Blockchain and AI will transform the insurance industry like never before…

Front-running Bancor in 150 lines of Python with Ethereum API